ABOUT ABOUT About COCON KARASUMA

Shijo Karasuma and COCON KARASUMA
The three important moments and the three designs of facility overlap with the history of the area and building
COCON KARASUMA, in Kyoto’s Shijo Karasuma, was renovated for the first time in 17 years, and the new area opened on Thursday July 22, 2021.
A new page has been added to the building’s long history.
The activities, the emotions, and the relaxing times all spent in this spot, shared by so many people.
1938 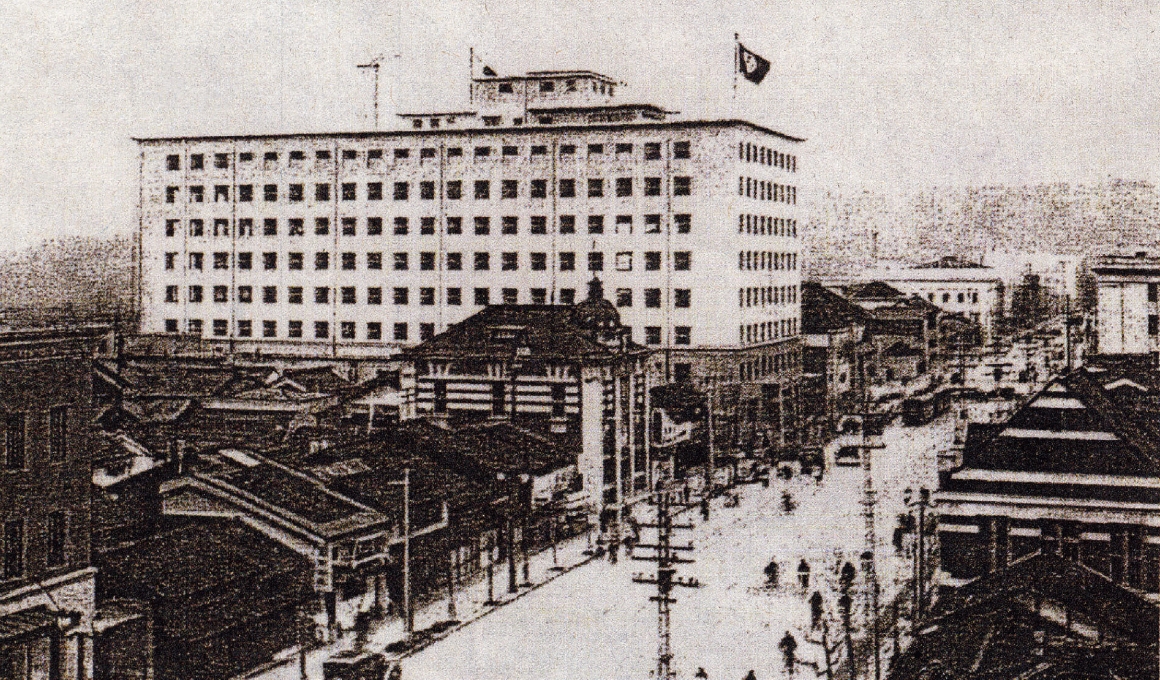 An exterior view of the Kyoto Marubeni Building at the time of its completion. The building was said to have been the largest architectural structure in Kyoto.

COCON KARASUMA opened at what used to be the Kyoto Marubeni Building, which embodied the elegance of modern architecture.

The original building was the former Kyoto Marubeni Building, first built in 1938. It was initially owned by a leading kimono merchant at the forefront of kimono culture at the time, and eventually became the famous trading firm, Marubeni. Kyoto’s first eight-storied modern concrete building was perfect for the company at the cutting edge of fashion culture. The façade had white stone walls with hand-made tiles lining the lower part of the walls. The expensive Ipe wood from the South Sea Islands was used for the flooring of the entire building, to welcome business guests with the finest hospitality. The structure’s combination of strong, linear framework, and lavish, extravagant details marks it as a masterpiece of Kyoto’s modern architecture, in terms of both scale and design. and also as a landmark of Shijo Karasuma. 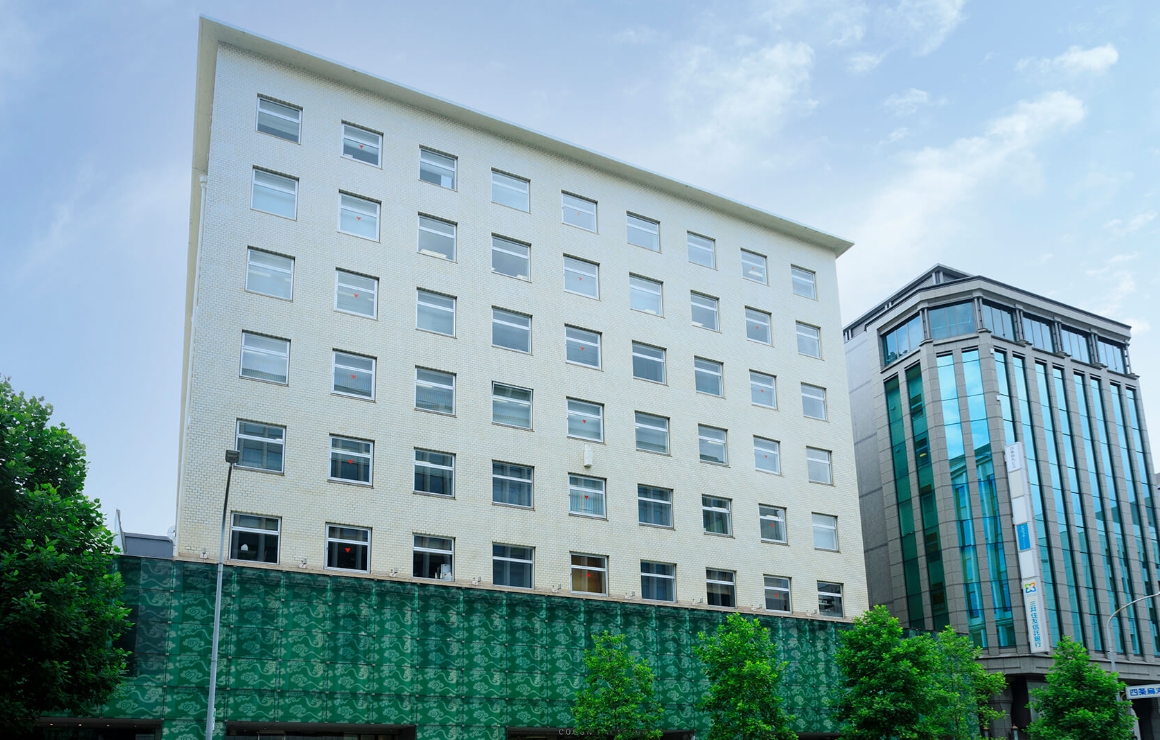 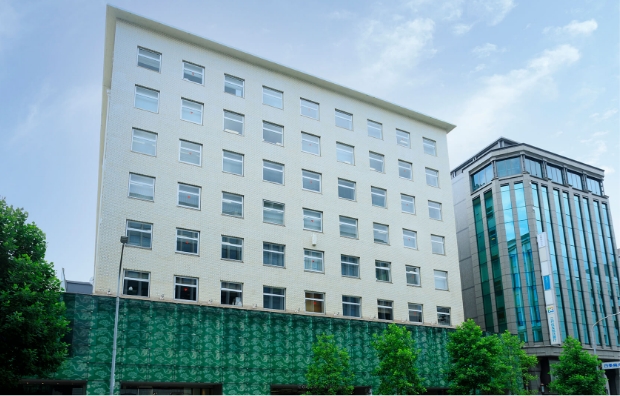 Restored as a new landmark, the building exudes a refined urban appeal along with the hustle and bustle of the city.

This area is known as the place where the floats of the Gion Festival line the streets. After the war, Shijo Karasuma area, which used to be filled with townspeople’s energy, handed over its role as Kyoto’s central shopping and entertainment district to Kawaramachi Shijo area, and became like a hollow city center. However, that started to change around 2000. The flow of people seeking a calm respite from the bustling Kawaramachi street started to head toward Karasuma street.

COCON KARASUMA was first created in 2004 as a commercial complex, functioning as a vibrant urban hub. The building was designed by architect Kengo Kuma. In this project, which was his first in Kyoto, Kuma didn’t simply go by the “scrap and build” method. Instead, he renovated the building based on the theme of “Past and present: two eras overlapping”.

The trademark of his work is the façade glass that features Tempyo-okumo, a popular Karacho karakami paper pattern. This pattern, handed down for generations since the beginning of Edo period by the long-established karakami paper atelier, has encountered the latest design under the concept of the up-and-coming architect, establishing it as the new landmark of Shijo Karasuma.

The emergence of the new COCON KARASUMA, which functions in various ways, such as an office, movie theater, restaurants, and others, brings you that special moment of comfort for your everyday life, while also offering a taste of the extraordinary, as it has once again revived the vibrance of Shijo Karasuma. 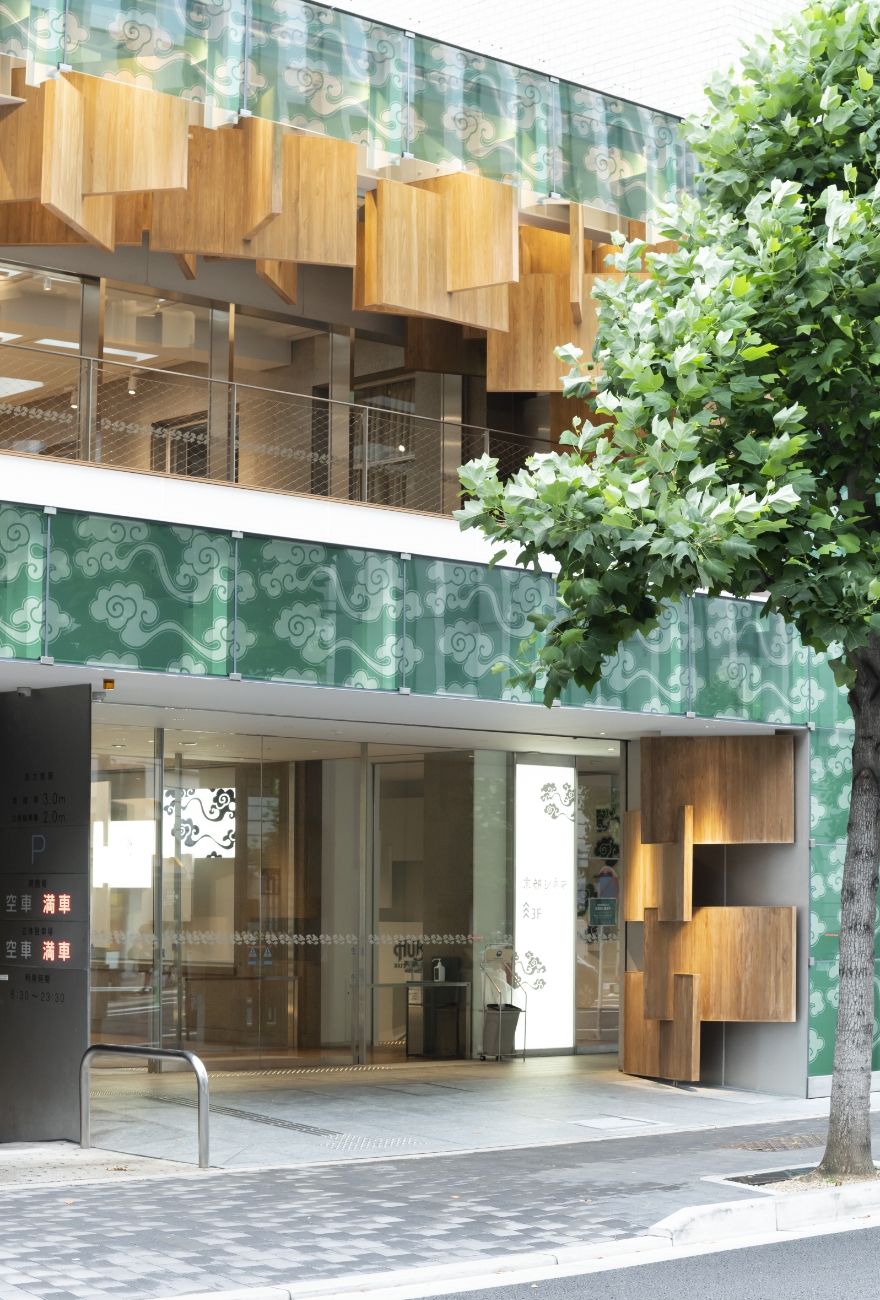 Integrating old and new designs.
WOOD-CLOUD, a symbol in futuristic architecture, has the effect of influencing people’s movements.

The COCON KARASUMA renovation project undertaken by Kengo Kuma in 2004 was also a pioneer project to show the ideals of sustainability and better lifestyles. The latest renovation project in 17 years includes the installment of WOOD-CLOUD, made of wood panels that hang like a cloud inside the façade featuring a Karacho karakami Tempyo-okumo pattern, integrating both the old and new designs of the building. Some of the newest features are the wooden floor and stairways that showcase the beautiful woodgrain and a newly built open space on the second floor that can be used for exhibiting artwork or various other events. Kengo Kuma speaks about his thoughts for this space.

Due to the spreading of COVID-19 throughout the world, people are needed to change their lifestyles. There is a great need for open-air space. In comparison to the cityscape, we have created a space that is set back like a space under the eaves, a terrace whose activities can be seen from the outside, and a space that extends further inside from the terrace. WOOD-CLOUD installed in the terrace connects the dynamism of the city and the space inside the building, creating a unique light and shadow effect that is similar to sunlight filtering through tree leaves.

Inside the building you will find newly installed stairways which give off a very dynamic look, as if it is a landscape made of piled up wooden slabs. A part of the stacked wood functions as counter and bench, which helps to create a lively atmosphere in the area that used to be a passage, as well as to direct the flow of people from Karasuma street. I have installed and created different things here and there that will start influencing people’s movements through architecture. 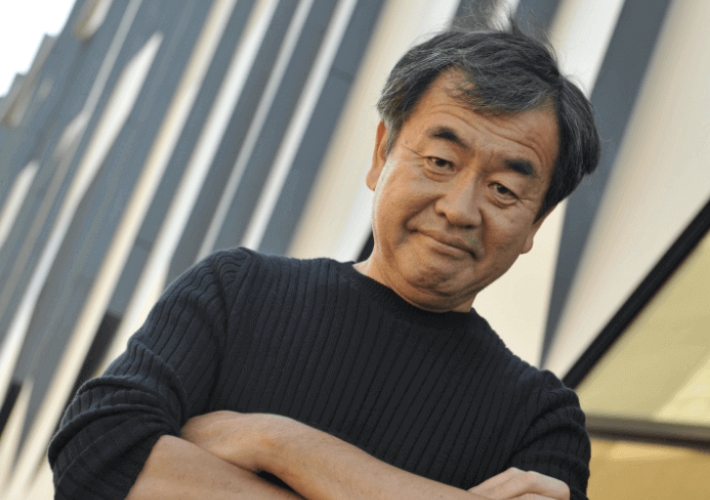 Profile of Kengo Kuma
Kengo Kuma was born in 1954. Before establishing Kengo Kuma & Associates in 1990, he received his Master’s Degree in Architecture from the University of Tokyo, where he is currently a University Professor and a Professor Emeritus.
Having been inspired by Kenzo Tange’s Yoyogi National Gymnasium, built for the 1964 Tokyo Olympics, Kengo Kuma decided to pursue architecture at a young age, and later entered the Architecture program at the University of Tokyo, where he studied under Hiroshi Hara and Yoshichika Uchida. During his Graduate studies, he made a research trip across the Sahara, exploring various villages and settlements, observing a unique power and beauty. After his time as a Visiting Scholar at Columbia University in New York, he established his office in Tokyo. Since then, Kengo Kuma & Associates has designed architectural works in over twenty countries and received prestigious awards, including the Architectural Institute of Japan Award, the Spirit of Nature Wood Architecture Award (Finland), and the International Stone Architecture Award (Italy), among others. Kengo Kuma & Associates aims to design architecture which naturally merges with its cultural and environmental surroundings, proposing gentle, human scaled buildings. The office is constantly in search of new materials to replace concrete and steel, and seeks a new approach for architecture in a post-industrial society. 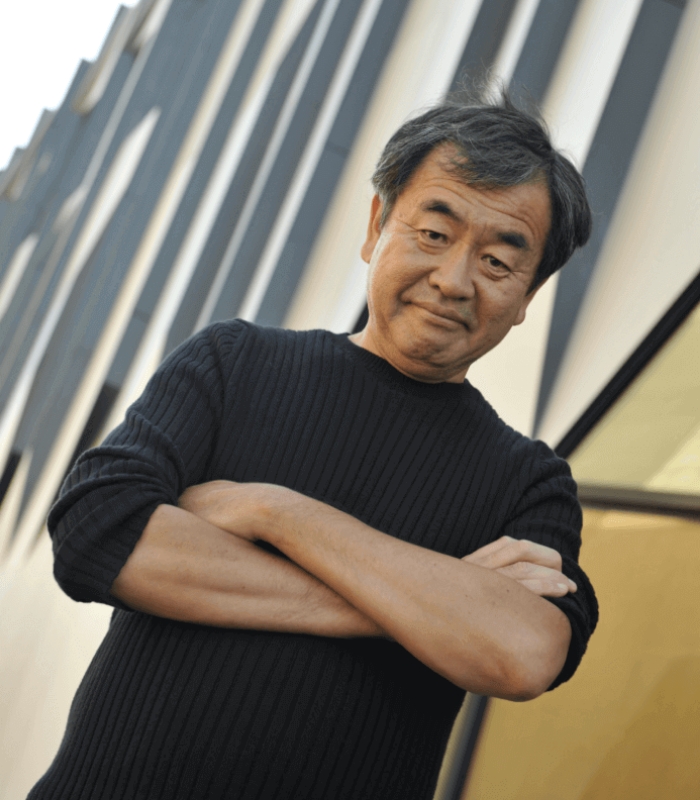